On our travels with the Diono Traverze

We were recently sent the Diono Traverze stroller to road test. It is a fabulously lightweight, super-compact pushchair which we've found brilliant for short trips and travelling with. We have owned quite a few pushchairs over our six years of parenting but have never come across one which collapses as small, is as easy to put up and down, or as light at the Diono Traverse.

Lottie is two and a half and although she walks now a lot of the time there are still times that her little legs get tired and she wants to hop in the pushchair. There are other times when it's just quicker and easier to pop her in the pushchair when we go to the shopping centre or into town and most recently Heathrow Terminal 5 where it is very busy!

We took it with us on holiday to Sardinia earlier this month and it was brilliant in the airport. We were able to take it right to the gate with us and it's small enough when collapsed to go on board in most overhead cabins. It comes with a handy case which you simply zip up over it to keep it clean and protected. It even has a telescopic handle to pull it along with just like a suitcase. We had lots of comments in the airport about how fab it was.


Lottie napped in the afternoon in the pushchair most days whilst we were away. She was having far too much fun to want to go back to the room for a nap but was quite happy to sit in her pushchair and have a walk around the resort before quietly drifting off. It has a reasonably large sun canopy meaning she was well shaded from the sun while she slept and I sat next to her and read my book.

The canopy has a viewing window in and there is a breathable mesh section to allow for airflow as well as a zip compartment. Ingeniously it has a 'flip flop friendly' break which is so easy to put on and release, I even did it comfortably bare foot. For such a compact pushchair there is a good amount of space underneath to store things. The handle bar is fixed in place but is foam covered and it feels nice to push. 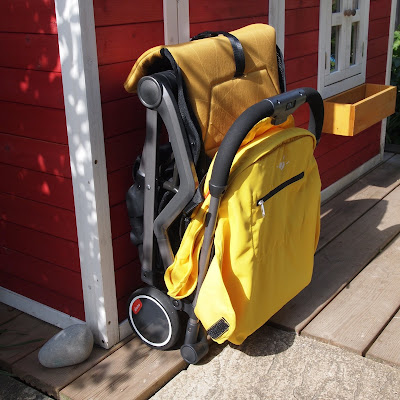 The seat fully reclines but does not sit completely upright, although Lottie was comfortable in it. When fully reclined for naps Lottie's Legs hang down onto the footrest but this would not be a problem for younger babies and it didn't seem to bother her.  The shoulder padding and buckle padding do slip around a bit but on the other hand are easy to take off and clean. We put them in the zip section of the canopy, or fastened the buckle when folded up so they don't get lost.

The wheels are small making it a smooth ride in airports, shopping centres and pavements but it's not suitable for cobbles and off road. It is a great city pushchair, hopping on and off public transport with it is no problem as it has such a small footprint even when up or can be folded up super quickly. It would be a great spare to keep at the grandparents when you're not using it to travel with as it folds up so neatly it could be kept under the stairs or in a cupboard. We've all had pushchairs that take up the whole hallway or that are difficult to get in doorways but this certainly isn't a problem with this pushchair.

Things we love about the Diono Traverze

All in all we think this is a fantastic pushchair to travel with and it definitely made holidaying with a toddler easier.

*We were kindly sent the Diono Traverze in exchange for an honest review.
All thoughts and opinions are my own.*
Posted by 3littleladiesandme

I'm Taryn, click to find out more about us

Looking for something in particular?

How To Save Money In January